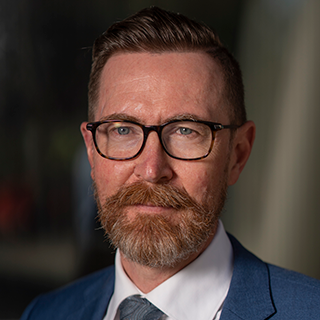 Professor Rory Medcalf has been Head of the National Security College (NSC) at the Australian National University since January 2015. He has led the expansion of the College into policy engagement and futures analysis, as well as executive development, education and research. This has positioned the College as ‘more than a think tank’ and a widely-trusted institution bridging academia and government to foster a more inclusive and holistic approach to Australian national security.

His professional background involves three decades of experience across diplomacy, intelligence analysis, think tanks, academia and journalism, including as founding Director of the International Security Program at the Lowy Institute.

In government, Professor Medcalf worked as a senior strategic analyst with the Office of National Assessments (now the Office of National Intelligence), Canberra’s peak intelligence agency. He was also an Australian diplomat, with wide experience including a posting to New Delhi, a secondment to the Japanese Ministry of Foreign Affairs, truce monitoring after the civil conflict in Bougainville and policy development on Asian security institutions. He has contributed to three landmark reports on nuclear arms control: the 1996 Canberra Commission, 1999 Tokyo Forum and 2009 International Commission on Nuclear Non-proliferation and Disarmament. His earlier work in journalism was commended in Australia’s leading media awards, the Walkleys, in 1991.

Professor Medcalf was a member of the expert panel providing independent advice on the Australian Government’s 2016 Defence White Paper. He is chief investigator in a 2018-2021 research project funded by the Carnegie Corporation of New York, examining the risks to nuclear stability from new submarine-detection technologies. He is also chief investigator in a 2019-2021 research project on Indo-Pacific strategy in the Indian Ocean, funded by the Australian Department of Defence.

He is a member of the editorial boards of the Australian Journal of International Affairs and Asia Policy. He has been a Nonresident Senior Fellow with the Brookings Institution and retains affiliations as a Nonresident Fellow with the Lowy Institute and the Seapower Centre of the Royal Australian Navy. His is a serving board member of the National Foundation for Australia-China Relations and the ANU Cyber Institute, and an Australian representative on the ASEAN Regional Forum Register of Experts and Eminent Persons.

In June 2022 he was appointed a Member of the Order of Australia for significant service to international relations and tertiary education.