Book Launch: Contest for the Indo-Pacific 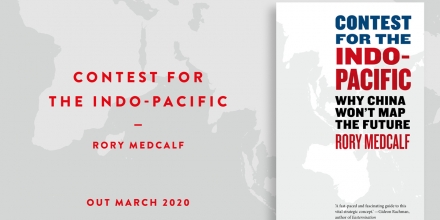 The Indo-Pacific is both a place and an idea. It is the region central to global prosperity and security. It is also a metaphor for collective action. If diplomacy fails, it will be the theatre of the first general war since 1945. But if its future can be secured, the Indo-Pacific will flourish as a shared space, the centre of gravity in a connected world.

Contest for the Indo-Pacific, published by LaTrobe University Press in conjunction with Black Inc., deftly weaves together history, geopolitics, cartography, military strategy, economics, games and propaganda to address the vital question: how can China’s dominance be prevented without war?

Join us for the launch of this highly anticipated book with a presentation from the author and reflections from Senator the Hon. Marise Payne, Minister for Foreign Affairs and Women, and Senator the Hon. Penny Wong, Shadow Minister for Foreign Affairs and Leader of the Opposition in the Senate. The ANU Naional Security College is honoured to host this launch, in keeping with the bipartisan spirit of our mission to deepen Australia’s national security debate.

Rory Medcalf is Head of the National Security College at The Australian National University. He has led the expansion of the College into policy engagement and futures analysis, in addition to its core work in education, executive development and research. He has three decades of experience across diplomacy, intelligence, academia, think tanks and journalism. He has been recognised as a thought leader internationally for his work on the Indo-Pacific concept of the Asian maritime strategic environment. He was founding director of the Lowy Institute’s international security program, a senior strategic analyst with the Office of National Assessments, and a foreign service officer with postings in India, Japan and Bougainville, Papua New Guinea. He was an adviser on Australia’s 2016 Defence White Paper. Professor Medcalf was an early developer and advocate of the Indo-Pacific concept, and is the author of Contest for the Indo-Pacific.

Marise Payne was appointed Australia’s Minister for Foreign Affairs on 28 August 2018. A Senator for NSW since 1997, she has more than two decades’ parliamentary experience including 12 years’ membership of the Joint Standing Committee on Foreign Affairs, Defence and Trade. She is a former Minister for Human Services, and has held several shadow ministries. The Senator was appointed Minister for Defence in September 2015. In this time, she delivered the 2016 Defence White Paper, the Integrated Investment Plan, and Defence Industry Policy Statement. She oversaw a major renewal of the Australian Defence Force’s capabilities and led the organisation’s increased international engagement program with allies and partners. She has been a member of the Liberal Party since 1982, serving on the NSW State Executive for 10 years, and was the Young Liberals’ first female President. The Minister holds a Bachelor of Laws and a Bachelor of Arts from the University of NSW. She and her partner, NSW Minister for Western Sydney, WestConnex and Sport, Stuart Ayres, live in western Sydney.

Penny Wong was born in Malaysia. As an eight-year-old she moved to Australia with her family and settled in Adelaide. Penny graduated in law and arts from the University of Adelaide. Before entering politics she worked for a union, as a ministerial adviser in the NSW Labor Government, and as a lawyer. Penny was elected to the Senate in 2001 and took her seat in 2002. In 2004, Penny was elected to the Shadow Ministry. Following the election of the Labor Government in 2007 Penny was appointed the Minister for Climate Change and Water. After the 2010 election Penny was appointed the Minister for Finance and Deregulation. In 2013, Penny was appointed Leader of the Government in the Senate. After the change of Government she was appointed the Leader of the Opposition in the Senate. Penny is the first woman to hold both these roles. Penny is the Shadow Minister for Foreign Affairs. Penny lives in Adelaide with her partner and their two daughters.

Attendees are invited to join us for canapes, light refreshments and book signings after the seminar.