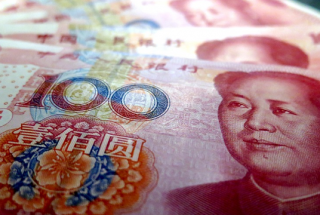 Australia will face numerous future choices about its relationship with China. Sometimes it will be in our interests to agree with Beijing. Other times, our interests will clash and we will need to push back. Australian sovereignty relies on our capacity to cope with attempts by China to use the economic relationship to exert pressure on our decision-making.

The nature of our economic relationship means that there are limits to the pressure China can apply without imposing sizeable costs on itself. Pressure that would have the biggest impact on our economy — such as threatening to restrict the iron ore trade — would likely be a ‘one shot’ option for Beijing, doing serious harm to that link thereafter. After all, Chinese attempts at economic coercion against other countries have often backfired in the long run.

But in future efforts to push back against China’s attempts at influence, it will be important for Australian governments to frame responses in terms that will be appreciated by the Australian public. It needs to be made clear that Australia is the partner seeking fairness in the relationship: China is responsible for lack of reciprocity over investment access and for giving competitive advantages to its state-owned enterprises.

Beijing wants to strengthen China’s position at the centre of an economic – and increasingly strategic – system across the Indo-Pacific and Eurasia. To this end it’s using a range of initiatives, increasingly under the Belt and Road branding, (2) and including direct investment, bilateral financing deals and aid.

There’s an understandable economic and strategic rationale. China recognises that its development depends increasingly on a wider region. It wants to build connectivity (hence the focus on infrastructure) to improve market access and better integrate markets with China, while helping Chinese industries find outlets for overcapacity, such as in steel. It is also seeking to diversify supply to improve energy security.

China wants to lock in its perceived advantages as the rising regional and global power.(3) To achieve this, it’s leveraging economic engagement with countries into influence in support of its broader policy goals. These can range from China receiving preferential commercial treatment, to countries keeping quiet on a range of issues related to maritime sovereignty disputes, human rights, democracy and international law.

Essentially, Beijing wants from its commercial partners the same deal that it has with its own people – economic benefits in return for acquiescence on politics and security.

China is not the only power that seeks to exert influence through economic engagement. But, as an authoritarian state, it is different in notable ways.

There’s much less demarcation between the state and commercial interests in China than in many other major trading countries: much of the economy and corporate sector remains under State control or influence, including large private sector Chinese enterprises. China also tends to link its commercial and political demands on other countries – as it has shown when putting pressure on countries like Japan, the Philippines and South Korea.

Countries’ growing engagement with China in trade and investment will lead to some rise in Chinese influence. Closer links create commercially-motivated constituencies in host countries for good relations with China. This is not unique to China – it exists for any country with economic weight.

To assist this passive building of influence, China offers economic inducements. But it is sometimes also prepared to threaten economic costs or the withdrawal of benefits. Before acting, though, Beijing assesses the costs and benefits of different economic instruments, depending on the impact on itself and its perception of likely reactions.

This explains why China is usually more careful with the United States, where it assesses there’s more likelihood of pushback, than with countries it perceives as having fewer options, due to their close geography, their financial need or simple lack of economic alternatives.

However, Beijing’s attempts at using coercive economic pressure have often been counterproductive, raising security anxieties and failing to change the target’s policy choices. For example, the restrictions on rare earth exports to Japan during a face-off arising in the East China Sea led to Japan diversifying its sources of supply.

By contrast, China’s economic inducements, though they may contain an implicit threat to withhold benefits, have been more successful. Beijing has bought Cambodia as its proxy in ASEAN, and potential economic benefits presumably swayed some European countries to try to block an EU statement critical of China after the South China Sea arbitration decision.

But inducements or the risk of damaged economic ties with China don’t always work. Countries often still place strategic priorities above economic gain – as South Korea has done by defying Chinese pressure to allow the United States to deploy missile defences on its territory to protect against North Korea. Or national political elites can respond to local opposition to growing Chinese commercial interests – as when the Myanmar government blocked a Chinese-funded dam project.

Many Australians probably imagine that their economy is overwhelmingly dependent on exports: this seems natural for an island nation in a connected world. In fact, Australia’s economy is not overly reliant on exports compared with many countries in Asia and Europe(4).

What is popularly recognised is that Australia’s exports are focused on Asia, and the share going to China — around 30% of merchandise and 16% of service exports — is the highest in the OECD and G20 (5). Exports to China are concentrated in a few sectors. Iron ore comprises half of merchandise exports, with gold, coal and wool adding a further 15%.

Even if it wants to achieve a security or political gain, China is unlikely to interfere with those Australian exports that matter to its economy as well as to Australia’s. China imports two-thirds of its iron ore, of which Australian producers supply around 60%(7). Limitations to China’s domestic supply and the structure of global iron ore supply means China has few alternatives to Australia.

Australia is more vulnerable where restrictions or disruption would have a lower economic cost to China, either because there are alternative suppliers, or Australia is a marginal complement to Chinese domestic supply. Examples are coal, tourism and education. Exports to China from these three sectors combined represent less than one percent of Australian GDP,(8) so any Chinese effort to disrupt them would have limited national impact but impose significant harm on the sectors and their domestic constituencies.

Investment is a key way of putting China’s potential economic leverage into perspective. China is a fast-growing and generally welcome source of foreign direct investment in Australia. According to Treasury data,(9) China was the biggest source of new business investment proposals in recent years. But the stock of Chinese direct investment is well behind that of US, UK and Japan and, even with Hong Kong included, similar to the Netherlands (see chart).

Any Beijing-directed reduction in direct investment in Australia is unlikely to have a lasting impact on our economy, other than reducing upwards pressure on asset prices. China is far from the only overseas source of finance for Australia. Chinese investment in Australia has fluctuated in line with market conditions. Like many other sources of foreign capital, it will likely continue to be attracted by Australian property rights protections. 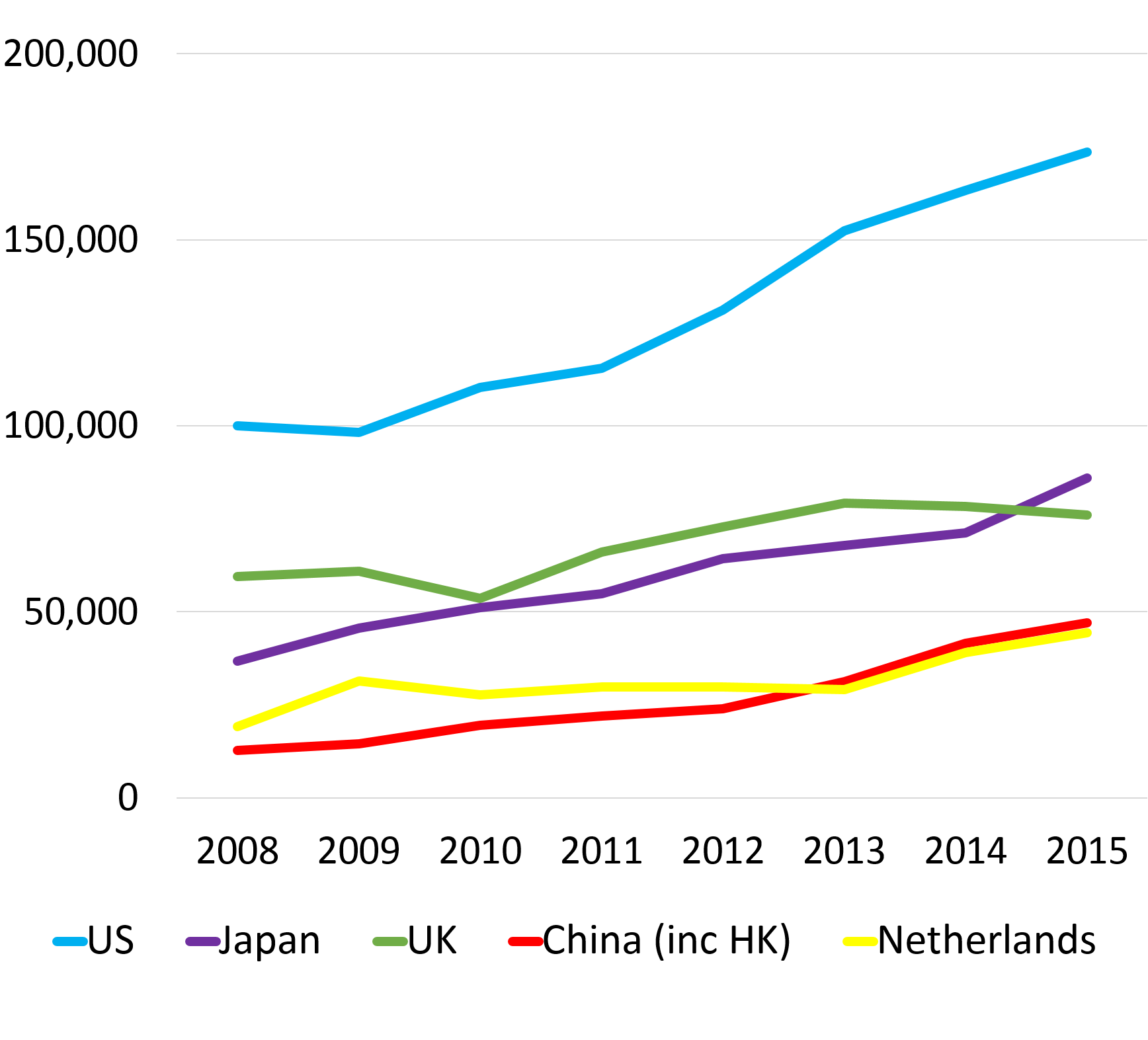 Beyond direct investment, financial integration between Australia and China is low compared with Australia’s links to the US and Europe. Indeed across trade, two-way direct and portfolio investment and other financial flows, the US remains our biggest partner (10).

Privately or publicly, Beijing criticises or complains to Canberra frequently over multiple issues. But the accompanying threats tend to be implicit or general – the bilateral relationship will suffer some unspecified deterioration if Australia doesn’t heed China’s wishes.

Even where Canberra has seriously annoyed Beijing, such as by supporting legal rulings on the South China Sea, Beijing hasn’t directed economic pressure specifically at Australia. Before Beijing resorted to serious economic measures, entailing costs to itself, it would likely take political steps like cancelling diplomatic dialogues.

If Beijing felt it needed to send an economic signal to reinforce its displeasure, its initial response would likely involve non-tariff barriers over quarantine and safety standards, or making life difficult for businesses operating in China, with limited long-term economic impact on itself or Australia. Beijing has reportedly adopted this approach towards South Korean business interests in China, though this has not changed Seoul’s stance on missile defence cooperation with the US.

Economic vulnerability is often as much about perception as reality. And it is in China’s interests for Australia to imagine itself highly vulnerable. Already, some voices in business, academia and the media focus on the possible economic impacts of annoying China.

The risk is that Australians will buy the story that their economy is so comprehensively dependent on China that Australia cannot afford to cause China much difficulty on security and political issues, even when our interests diverge.

Australians are already more likely than others in the region to think that China is the most influential country in Asia: polling suggests Australians think China is more influential than the Chinese think themselves (11).

The lasting economic impact of some future act of Chinese leverage or coercion is relatively manageable. However, the perception of economic harm can have an outsized effect on domestic interests, creating pressures for rapid political compromise. Indeed, the intersection of politics, domestic interests and perceived economic harm is likely to be the most effective way for Beijing to exert pressure.

The risk is that we over-react to any Chinese economic threats and self-censor on issues perceived to be problematic for Beijing. Succumbing to pressure won’t protect Australia from further pressure, as it will signal that such pressure works.

Managing our relationship with China will require a clear appreciation of our national vulnerabilities and our resilience.

To reduce our susceptibility to pressure, we need to strengthen public awareness and transparency around the channels China – and other foreign countries – use to build influence in Australia, including at the state, territory and business levels as well as with the Commonwealth.

Public and political awareness also needs to be improved about Australia’s economic relationships, including our diverse investment ties. This will allow voters and decision-makers more perspective about the nature and limits of Chinese influence.

(1) Edited by Professor Rory Medcalf, Head of the National Security College, and based on substantial research and drafting inputs from National Security College staff. This work has drawn on consultations with a range of former and current Australian policy practitioners and academics in 2016 and early 2017. (2) The Belt and Road initiative, alternatively referred to as One Belt One Road, is shorthand for the land-based Silk Road Economic Belt and the ocean-going Maritime Silk Road, a development strategy by which China aims to build economic connectivity between China, Eurasia and Africa. The initiative was unveiled in 2013 and enjoys widespread senior leadership backing, notably from President Xi Jinping. (3) Howard French, Everything Under the Heavens: How the Past Helps Shape China’s Push for Global Power, Knopf, 2017 pp. 270-276. (4) For example, in 2015 the ratio of exports (goods and services) to GDP was 20% in Australia, similar to Indonesia, below the UK (27%) and well below South Korea (46%), Germany (47%), Malaysia (71%) and Singapore (176%) (World Bank). (5) The proportion of Australia’s merchandise exports going to China has possibly peaked as the Chinese economy slows and focuses more on domestic consumption and services. (6) Australia exports significant volumes of natural gas to China — according to the BP Statistical Review of World Energy, China is Australia’s second largest export market for LNG. ABS confidentiality restrictions prevent a country breakdown for LNG exports. (7) Office of the Chief Economist, Department of Industry, Innovation and Science. (8) ABS, DFAT China Country Fact sheet. (9) Treasury Foreign Investment Review Board Annual Reports. (10) For a detailed discussion of the US-Australia economic relationship see Ian Satchwell, Trumping Trade: Understanding the Australia-United States Economic Relationship, Perth USAsia Centre, March 2017 (11) The Asian Research Network: Survey on America’s Role in the Asia-Pacific