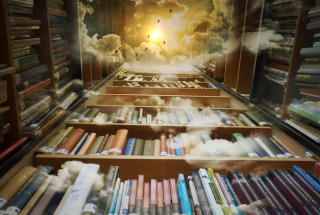 Is truth really stranger than fiction? Perhaps, but each is capable of shaping the other. Fiction simulates events and records and communicates information. As Ryan Young from the Futures Hub at the ANU National Security College muses: ‘Stories are built on tension, conflict and trade-offs – which make them great vehicles for analysing complexities and different perspectives’. This has at least three consequences for national security policy development.

Fiction influences public perception of policy issues and government. For example, Howdy McCurdy, a Professor of Public Affairs, argued policy approaches to institutionalisation and mental illness in the United States were transformed in the 1960s by the popularity of fiction that engendered empathy for the mentally ill and concern for particular practices in psychiatric hospitals at the time. While the issue had been live in scholarly circles for some time, the fiction landscape, which included Ken Kesey’s One Flew Over the Cuckoo’s Nest, helped create shifts in public perception.

Lindy Orthia, a researcher at the ANU Centre for the Public Awareness of Science, suggests that fiction is a ‘potent public policy tool’ and can shape perceptions of public institutions, such as the ways in which Star Trek and Space Cowboys increased public support for science institutions like NASA. Dr Orthia makes the point that “Brave New World”, ”Frankenstein”, or “Gattaca”, for example, become points of reference in debates on the way we use technology. It is perhaps no surprise, then, that Australia’s former Chief Scientist, Alan Finkel, proposed in a 2017 speech that all leaders read science fiction:

Imagination is a necessary prerequisite to anticipation. Cooperation between military and science fiction writers has occurred in a number countries, including Canada, France, Germany, and the United States.

For example, ’Red Team Defense’, made up of science fiction authors, illustrators, and designers, was created in 2019 by the French Ministry of the Armed Forces. Red Team Defense have developed scripts imagining new threats and challenges for the French army over the 2030-2060 period. Emmanuel Chiva, Director of the Defense Innovation Agency, observed:

This project is not a gimmick. Our aim is to be surprised and challenged. We hope that the authors will invent societies that we would not have thought of, military models that surprise us and weapons that do not yet exist.

Fiction writer, Karl Schroeder, reports he was hired by National Defense Canada to write dramatised future military scenarios. The manuscripts included Crisis in Zefra, set in an imaginary African city-state around the year 2025 and focusing on the challenges a Canadian peacekeeping force might encounter when dealing with an insurgency in an urban war zone equipped with drones, cellphones and internet access. He also wrote Crisis in Urlia, which is premised on a drought-and-famine situation. And, after the terrorist attacks of 9/11 in the United States, the Pentagon reportedly reached out to Hollywood filmmakers, among them Die Hard screenwriter Steve de Souza, for “some left-field, off-the-wall ideas” concerning further potential scenarios of disruption.

In Germany between 2017 -2019, Project Cassandra (the Cassandra of ancient Greece was cursed never to have her predictions believed) aimed to use literature as a “tool for early crisis detection”. The team included Jürgen Wertheimer, a professor of comparative literature, who reasons that literature is useful to security because it can channel social trends and points of conflict that politicians might avoid using publicly until a breaking point is reached or an event has occurred.

According to Keith Oatley, a novelist and professor emeritus of cognitive psychology at the University of Toronto, literary fiction is “essentially an exploration of the human experience”. In 2006, Oatley and colleagues published a study that identified a “strong connection” between a person reading fiction and enhanced performance on empathy and social acumen tests.

Reportedly, however, only literary fiction had this effect (and not, for example, non-fiction or ‘popular’ fiction – although of course, each has merit for different reasons, including information and entertainment!). Nevertheless, increased empathy is important to public policy and national security decision-making because it is linked with our ability to comprehend and anticipate the beliefs, motives, and actions of others.

In turn, this all means that diversity in fiction matters both morally and strategically. If we confine our consumption of fiction to authors that closely resemble our own cultural and social experiences, we risk idealising our own way of doing things and miss opportunities to think outside the box and to spot unexpected risks and challenges. The Reluctant Fundamentalist, for example, by Pakistani author Mosin Hamid lends a perspective on the post 9/11 world that would be near impossible to garner elsewhere. A co-author and I have previously argued that diversity and inclusion matters in national security and foreign affairs more broadly because it helps strengthen, maintain and ride the ”fluctuating waves” of foreign relations. Dr Elise Stevenson, of The Australian National University, points out that bias (perhaps either a conscious or unconscious result of a lack of diversity) “ultimately impacts the strength and agility of Australian national security”.

Any and all faults are my own.