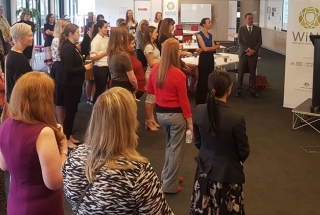 Thanks Rory for that introduction.
I also acknowledge the Ngunnawal country where we meet today, and I extend my respect to its elders, past and present.

It’s hard to overstate how lucky we are to be here this morning – meeting in person, inside, without masks, and sharing a breakfast.

Through tough decisions, hard work, and the good fortune of geography, Australians are in better situation than many of our international partners in this pandemic.

Nevertheless, the pandemic is changing our strategic and economic landscape… …and it’s brought home to all of us the connections between non-traditional security challenges like health security, and our traditional ideas of national security.

Today I want to reflect on some of these changes, and talk particularly about one of the biggest challenges I see – the disproportionate impact of the pandemic on women and girls.

I won’t retrace Frances’ remarks, but I do want to highlight one thing she said: “We are now facing a much more complex strategic landscape where…challenges are multi-layered, evolving at a faster pace and their impacts are felt more quickly and directly.”

Yes, we find ourselves in the middle of the most damaging and disruptive pandemic in a century.

COVID-19 is a health security crisis, but it’s also an economic, financial and jobs crisis.

Australia’s real GDP contracted by 7 per cent in the June quarter 2020, the largest quarterly fall on record.

It will take years for some economies in our region to recover.

Fiji’s economy, for example, is forecast to lose around 20 per cent of its pre-pandemic size in 2020.
But the impacts of the pandemic reach beyond heath and economic concerns.

Many governments – overwhelmingly focused on the situation at home – have less policy bandwidth and fiscal space to engage globally.

And it threatens to divert attention from long-term, systemic global and regional challenges, including human rights, democracy, and climate change.

The complexity and pace of these challenges will keep intensifying.

In the three short months since Frances’ speech, we’ve seen mass arrests of politicians and activists in Hong Kong.

An extraordinary attack on the US Capitol.

And a coup in Myanmar.

We don’t know when, how or where the next major global challenge or crisis will come from, or whether it will be from non-traditional or traditional national security sources…

…but we do know that any challenge or crisis will have wide-reaching implications for our national interests.
In many ways, the pandemic has held up a mirror up to our communities, our countries, and our region, and it’s laid bare some hard truths.

Not all health systems can withstand crisis.

Not every economy will bounce back quickly.

Not every community will have equal access to a vaccine, although we’re working hard to fix this.

And that, like in so many global crises, women and girls have been disproportionately impacted.

Let’s look at the data.
Women are more likely to be exposed to COVID-19.

They comprise 70 per cent of the global health workforce, and are on the front lines as essential workers, community leaders, carers and social workers.

Women are shouldering much of the economic burden.

They’re overrepresented in the sectors hardest hit, including tourism, hospitality, and retail.

The McKinsey Global Institute reported last year that women’s jobs are 1.8 times more vulnerable to the crisis than men’s jobs.
Surveys in Solomon Islands found that women were more likely to have stopped working, and less likely to restart, than men.
Of those still working in June, one third were working for less than what they earned in January last year, or not being paid at all.

And for the 740 million women globally in the informal economy, incomes fell on average by 60 per cent during the first month of the pandemic.
Women and girls are among the most vulnerable to education disruptions.

In East Asia and the Pacific, 20 per cent of girls – 40 million in total – were unable to access remote learning or continue education during school closures.
1.2 million more girls are at risk of dropping out in the next year alone, likely to never return to school.
And in South and West Asia, 2.8 million women and girls may not be able to return to education, from pre-primary to tertiary levels.
The pandemic has reduced women’s access to health services.
The World Health Organization reports that seven out of ten countries experienced disruptions to family planning services and commodities.
In Indonesia, an additional 450,000 births are expected this year due to lockdowns that restricted access to family planning services – a birth rate increase 10 per cent above the long term-average.

In Nepal, a study of 20,000 women in nine major hospitals revealed a 50 per cent increase in stillbirths due to inaccessibility to health facilities and antenatal support.

Domestic violence against women and girls has surged.

Calls to the national domestic violence helplines in Fiji increased 600 per cent from February to April, and tripled in Papua New Guinea.

Online searches for terms like ‘signs of physical abuse’ jumped by half or more in Malaysia, the Philippines and Nepal.
And yet, UN Women reports that in Asia and the Pacific, only eight per cent of fiscal and economic measures introduced by governments to bolster economic security, social protection and labour market responses can be classed as gender responsive.
Six out of 28 countries had no gender-sensitive measures at all.

We know there’s a clear link between the wellbeing, prosperity and productivity of women, and that of societies as a whole.

The fact Minister Payne is both Minister for Foreign Affairs and Minister for Women speaks to Australia’s firm belief in the connection between gender equality, and peace, security and prosperity.

According to McKinsey, if no action is taken to counter the disproportionate impact of the pandemic on women, global growth could be $1 trillion lower in 2030.
Conversely, taking action to advance gender equality could add $13 trillion to global GDP in 2030.
Educating girls improves labour market outcomes, reduces poverty, delays marriage, reduces mortality and fertility rates, and increases GDP.

And including women as peace negotiators in conflict increases the probability of a resolution enduring after 15 years by 35 per cent.

So empowering women and girls isn’t just the right thing to do, it’s actually the surest route to society-wide recovery.

That’s why Australia is putting women and girls at the heart of our pandemic response, and Partnerships for Recovery strategy.

We’re working with organisations to deliver essential health services disrupted by the pandemic.

And we’re helping our neighbours respond to the economic impacts of the crisis on women and girls.

For example, we’re investing $523 million to roll out vaccines to our region, alongside our $80 million contribution to Gavi’s Advance Market Commitment vaccine pool for developing countries globally.

Women play a key role as trusted sources of information in their communities, and so we’re looking to engage women in vaccine advocacy campaigns.

And we’re pressing for increased representation of women and women’s interests in regional forums, including at the three virtual Pacific Women Leaders’ Meetings co-chaired by Minister Payne last year.

In Indonesia, we funded advice to help the Government expand the Family Hope cash transfer program to reach 800,000 more women, and electronic food vouchers to 3.6 million new beneficiaries, 96 per cent of whom were women.

In Timor-Leste, we supported the NABILAN Program to keep gender-based violence services open during the pandemic.

And in Papua New Guinea, we partnered with the Government and UN Women to educate and equip market customers and vendors – overwhelmingly women – to stop the spread of COVID-19.

Our development partnerships are also promoting women’s leadership in politics, participation in peace and security processes, and helping to get women and girls into decision-making roles.

And through the Elsie Initiative for Women in Peace Operations, we’re helping to increase the deployment of female peacekeepers.

There are lots more examples of how Australia is putting women and girls at the heart of our pandemic response, and I’m happy to touch on these during the Q&A.

But I do want to leave you with two messages today.

First – we shouldn’t preach what we’re not willing to practice.

As women working in national security, we need to bring our voices, insights, experiences and leadership to the table in ensuring foreign, trade and development programs advocate and empower women and girls.

Bringing more women – and more diverse voices in general – to Australia’s national security dialogue is central to DFAT’s Women in Leadership Agenda, which I’m proud to champion… …and also reinforces the value of initiatives like the College’s new professional development program on diversity.

Second – as policy practitioners, we cannot afford to lose sight of the direct correlation between gender equality, and peace, security and prosperity.

It’s in Australia’s national interest, and in the interests of a healthier, safer and more secure region.