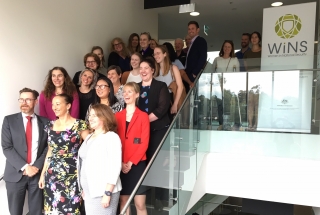 Both women offered remarks to the attendees at the afternoon tea, Gai spoke to the domestic and Kori to the international and both to a womens’ perspective of a career in national security thinking and policy making. Below is the transcript of Gai’s comments:

I would first like to acknowledge the traditional owners of the land on which we meet and pay my respect to their elders past, present and future.

Thanks to the National Security College for inviting me today for this International Womens’ Day event.

In 2014 I went to Afghanistan as part of a Joint Standing Committee on Foreign Affairs Defence and Trade Defence sub-committee delegation. I was the only female.

It was when our operations were at their peak.

I went into war zones that had just been pacified.

I met extraordinary young Australian men and women from the ADF who were teaching the Afghan National Army not just how to be soldiers, but how to read!

And I learnt of a story of a village in a remote part of Afghanistan. A village that was the recipient of a significant sum of international assistance to plumb the packed earth houses with running water.

Terrific idea you would say.

Linking these houses up to the 21st century.

The problem is, no one had bothered to discuss this terrific idea with the women in the village.

Because for the women the plumbed running water was a complete and utter disaster.

Because for the women, the only daily outing they were allowed to do on their own, unaccompanied by men, was to go to the well to collect water.

There they could not just collect water for their family, they could catch up with their girlfriends, their community.

There they stayed connected.

The plumbed running water may have connected them to the 21st century, but it cut those women off completely.

It socially isolated them.

It disconnected them from the only outing they were allowed each day. The plumbed running water confined them to quarters - permanently.

When I get asked why we need women in national security, why we need women around the decision making table in conflict zones, in peace transition and resolution, in humanitarian assistance and disaster relief, I think of that story.

It’s so women can determine their own future, not the future that men - or well meaning development officials - think they ought to have.

So that women can be leaders, negotiators, decision makers, strategists, in conflict and instability, not just victims.

I’m a strong advocate of the Women, Peace and Security agenda and I welcome the final progress report on Australia’s National Action Plan that was recently released.

Yes, there have been significant achievements.

The percentage of female Australian Government employees deployed to conflict and post-conflict settings has increased over the last four years thanks to the efforts of Defence, the Australian Federal Police, and the Department of Foreign Affairs and Trade.

Five years ago, that figure was just 53 per cent.

The Australian Defence Force has also delivered the region’s first Operational Gender Adviser course for those participating in regional or international operations and exercises, the first of its kind in the Indo-Pacific region.

The Pacific Police Development Program aims to improve frontline responses to survivors of violence against women.

And I commend all those involved in these achievements.

But now that we are embarking on developing a new action plan, which I understand will be launched in the middle of this year, we need to take a close, hard look not only at what we are achieving, but how we are driving behavioural and cultural change.

When the current National Action Plan was launched, it was the first of its kind in Australia, and still early days for the WPS process.

So naturally, the focus was on establishing the architecture and mechanisms for getting the agenda up and running.

For getting the agenda taken seriously by our national security agencies, embedded across government, coordinated domestically and internationally and improving the engagement with civil society.

Seven years on, attention now needs to focus on the intent of the plan—to foster a business-as-usual gendered perspective, and with that cultural and behavioural change.

Because the existing plan provides a comprehensive list of what it bills as outcomes—dialogues, training sessions, working groups, roundtables, exhibitions, courses, networks, statistics - which are improving the number of women in the ADF, the AFP, in UN positions—all important and necessary.

But these aren’t outcomes.

What did all these actions achieve?

What cultural and behavioural change did they realise?

What benefit did they deliver to women and girls?

For the WPS agenda to become business as usual, the next plan needs to include a clear statement of mission, a set of meaningful and measurable outcomes, and rigorous quantitative and qualitative data to have a clear picture of what has changed, particularly in defence capability and capacity.

As a start, I suggest a change of name for the next plan, so priority is less on action and more on tangible results.

If we’re to realise behavioural and cultural change, we also have to create a sense of urgency about the plan and its broader agenda, through more frequent updates to parliament.

And given the plan is critical to our national security and peace efforts, and as much about our defence capability and capacity as it is about gender, the Minister for Defence, Minister for Foreign Affairs and the Minister for Women should jointly update the Parliament—with all three shadow ministers responding in the spirit of bipartisanship.

The Defence annual report, which is also tabled in Parliament, is reviewed each year by the Joint Standing Committee on Foreign Affairs, Defence and Trade Defence Sub-Committee. Why not the same with the progress reports?

And we need to get more parliamentarians on board with the WPS agenda.

Senator Linda Reynolds and I, as co-chairs of the Parliamentary Friends of Defence, have had a number of roundtables on the WPS agenda with colleagues, but we also need our colleagues to witness how it is working on the ground.

So consideration should be given to including a National Action Plan stream in the Parliamentary Exchange Program.

And future parliamentary visits to operations should include briefings on the plan—and where possible, tours of the programs.

At the moment it seems any discussion is treated as an optional extra, usually reserved for female parliamentarians and usually only on request.

On that delegation to Afghanistan in 2014, I had an invaluable and insightful meeting with two female ADF members in Tarin Kowt who spent significant periods beyond the wire speaking to women in the community, gaining intelligence, getting an understanding about their issues.

And I while the plumbed water story angered me, their story of the level of opiate addiction among women in the area horrified me.

Because in the provinces of Tarin Kowt there are no chemists around the corner for drugs for period pain, or maternity wards for drugs for childbirth.

So the women use opium to manage pain.

But what’s worse is that men use opium to manage women.

And I was reminded of this story at this week’s RSA cyber security conference in San Francisco - from which I’ve just come home.

Because only 11 percent of the cyber security industry are women.

At a time when our world is so dependent on technology, we need more women in the cyber security space to shape this interconnected future.

We need more women in this space to ensure that technology advances women, liberates women, empowers women, gives women choice and options, allows women no matter what their postcode, race, religion, nationality, the opportunity to flourish and realise their potential.

We need women in this space to ask the question if it is:

Fortunately these are conversations the few women in cyber security are having now, but we need to have louder and more frequent conversations about these issues, about the possibilities and unintended consequences of technology, particularly the Internet of Things.

Put simply, we need women like you and plenty more of you to make sure that women don’t lose out in the future.

That women shape peace and are liberated by peace.

That women shape technology and are liberated by technology. Not enslaved.

That they are around the table, and not the dinner.