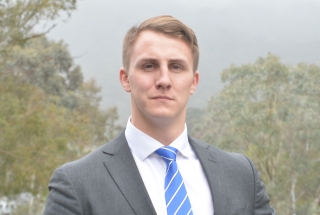 For Liam Jones, the Masters of National Security Policy was a natural stepping-stone towards a career in policymaking.

“I did a Bachelor of Arts in politics and English, and while I got a lot out of it, I felt I needed something a bit more relevant that would open up some opportunities for me,” he says.

“I found the Masters of National Security Policy quite interesting in the way it broadly addressed national security issues. When I started at the National Security College I was working as a political staffer, and then I recently joined [private-sector firm] KPMG, working with the Defence Department on defence projects.”

For Liam, one of the NSC’s attractions was its close connections with government.

Liam has found the Masters program has enriched not just his academic knowledge but also his practical skills.

“The lecturers are excellent and the subject matter is all very relevant,” he says.

“We’ve done theory and a lot of different things, but the courses are constructed in ways that always come back to how these things affect policymaking or current national security issues.

“There’s also a focus on building skills, which has enabled me to be more effective in my professional capacity. It goes from right on the practical end – like writing policy briefs or issues briefs, which I do at work – to policy development, to the landscape of the national security community, which has been very useful in my work. Having that knowledge puts me on the front foot.”

A diversity of skills and experiences among his classmates has also provided Liam with a well-rounded network of contacts. “The NSC not only delivers really good courses, it also plugs you into a network of people involved in the national security space,” he says.

“I have classmates who are already working in national security who are sharpening up their skills, and people like myself who want to take that next step, so you get a good mix.”

As his career progresses, Liam hopes to move more into national security policy. He believes his degree has provided a strong foundation for his ambitions.

“I’d like to shift more into policymaking, whether that’s through working in a ministerial office or government department, and I think that my course, with some good work experience, will put me in a good position to be competitive for those positions,” he says.

“I’d recommend the Masters of National Security Policy to anyone who wants to work in national security, from analyst roles through to policymaking roles,” he says.

“It really gives you an understanding of the contemporary challenges that we face, and it also gives you a set of skills and ways of analysing those challenges and coming up with solutions.”