From Mongolia to Master of National Security 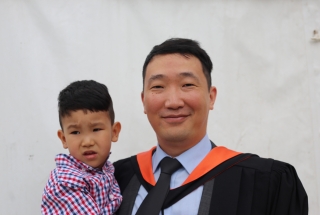 When Mongolian national Enkh-Orshikh Khurlee was looking to pursue postgraduate studies in Australia, he says the Master of National Security Policy at ANU was an obvious choice.

“I had to weigh university, location, and most importantly, the program. Fortunately it was not a tough call.

“The National Security College was offering a program that was exactly what I was looking for with a broad, multidisciplinary understanding of national security and it was at the ANU which was already known for its international standing and reputation.”

Accompanied by his family, Enkh-Orshikh relocated to Canberra - which he describes as a “terrific city to live in”.

“The quiet, safe and family friendly nature of the city is perfectly suited to me.

“It not only houses some great museums and galleries, but is also large enough to create a vibrant and multicultural atmosphere.”

In addition to undertaking his Masters degree at ANU, Enkh-Orshikh has also been working with the ANU Mongolia Institute.

“I would not have thought before coming here that I could also contribute to the efforts of Mongolian studies at the same time as studying. This is one of the perks of studying in a major university.”

Enkh-Orshikh specialises in Asia-Pacific studies with a focus on strategic studies, cyber security and North-East Asia. Prior to making the move to Canberra, Enkh-Orshikh worked at the Ministry of Foreign Affairs and the Parliament Secretariat of Mongolia.

“I am confident that my study here will contribute enormously to my professional and personal development goal to become a career diplomat with expertise in national security and policy-making.”